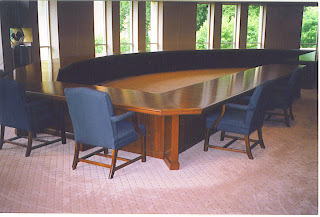 We had an appointment the other week. We decided to see a financial advisor. This guy was recommended by several folks. One of them was a former landscape client of mine. She mentioned that he helped them outline a plan so that they'd be able to reach their goals in the future. We all went to the same church. Although I didn't know him on a personal level, I would easily recognize him and his family. The hubby and I don't have a lot of definite goals for the future / retirement. I'm not a big traveler so that's not on the horizon. But I think we both would like to make sure we're able to stay in our home with a modest lifestyle similar to where it is now, and so we're seeking advice/guidance. We both meet after work that night with our pile of paperwork. We were a little chatty as we head into the office building. The office is on the 7th floor and as we’re riding the elevator I'm reminiscing to my husband about the company I had interviewed with in this building more than 10 years ago. The elevator doors open and we're greeted by Uncle Ian. (No, that is not actually his name. I was trying to think of something clever or a nifty acronym to use in this post. Then I remembered Uncle Ian from the Alvin & The Chipmunks movie, and so "Uncle Ian" it is.) We followed to the conference room, put our stack of papers on the table and we all sat down. Uncle Ian asked us to tell him a little about ourselves. General stuff, such as where we work, what we do at our jobs, where we live, how long we’ve been together. Then of course the conversation leads to his asking about our current financial situation and what our financial future plans involve. Most of our plans right now involve our home. It's a beat up old house - neglected for many years before we bought it almost 3 summers ago. There are several structural issues that need attention. Some of you may know how expensive structural repairs can be. I mentioned the other financial possibility that would affect our future plans would be a child. I mentioned that we are going to try for another year and see what happens. I didn't make a big deal of it and moved along to the next topic. Or so I thought we moved on. Uncle Ian gets this certain glowing look to his face as he leans back and pulls his hands together as he twists his pen and says, "Well, after a year, if nothing happens we can always talk about adoption if you want to." Now, I was not totally caught off guard by this statement. I do know Uncle Ian has two daughters who are both adopted. Even if I had not heard the story he has shared about 'bringing them home’, I would still know they are adopted. It is very apparent. After all Uncle Ian and his wife are white. Very very white. They do not a trace of Asian heritage whatsoever. Since I was not entirely blindsided (although a bit surprised - I admit), before he could continue to his second sentence, I was able to abruptly respond with "No, we don't want to talk about it." I was somewhat amazed at myself at how calmly I responded without lunging across the table to shake the poor guy. Inside I was simmering a bit, but I understand this fellow did not know MY story, and I tried to just let it roll off. And so we move on. I was grateful “that” was over. I was glad it didn’t get ugly either. When we were wrapping things up for the evening, Uncle Ian hands us a business card. He repeats his plan to gather some info for us and run some numbers. He brought up confidentiality - that although we all go to the same church his wife does not know who he meets with. During the final notes as he's about to send us out the door he says, ”And keep an open mind about adoption. It is a subject that I am very passionate about and I could talk with people about adoption for hours.” GAAA!!! The first time I could let it go, but now it's a SALES PITCH! A stinking Adoption Sales Pitch!?!? Un be lievable! I just looked him in the eye and said "I have very strong opinions about it already. I don't want to discuss it." Although I could not actually see the expression on my face, I think I looked calm and collected on the outside, but now I really WAS wanting to lunge at him and start banging his head on the table. I'm not sure if he could read what was really going on in my mind as I smiled, waved and said "good night".
As we are 'safely' outside and walking back to the truck, I was feeling strong by being firm, by standing my ground, and by not being reduced to tears or a sniveling little ball of snot. And so I ask my hubby (who indeed is a treasure and an unbelievable source of strength for me in the really dark times), “So, do you think my answers were pointed enough to keep Uncle Ian from ever bringing up the subject again?” I wish he were wrong, but my shoulders slumped a little from the reality and my heart fell when my husband gave his honest answer, “No. I don’t think that was enough.” Uncle Ian is determined and I guess I need to be better prepared for Uncle Ian’s Next Adoption Sales Pitch.
Adoption Sales Pitch
Posted by Cheerio! at 1:01 AM