The book is less than 200 pages long and it took me about three years to read it.  It will always be on the top of the pile for me because it was my first steps toward dealing with the loss of my son.

Although this book is not adoption related at all, it hit the very core of my experience. 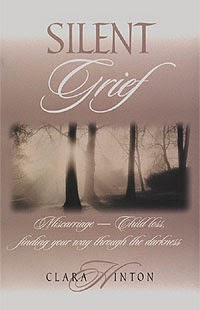 The reason I bought the book was because I remember the (biased) “counselor” at Bethany Christian Services (aka: Bethany NONChristian Disservices, or BS for short) made the comment along the lines that giving up a child is similar to losing a child to death.  At the time I was pregnant I did not know of anyone who had experienced such a thing and had no way of knowing what that experience was like.

So, almost ten years into knowing what it was like living with adoption loss I purchased this book to find out if the “counselor” was right.  Was adoption loss similar to the loss of a child to death?  This was obviously before I found out personally what it is like to lose a child to death.

My analysis of the book is that it is very well written and I highly recommend it!

I was hesitant about it at first because it is written by a Christian woman and I anticipated her telling people that “all things work together for good” and for her to whitewash any pain and say how happy and full of joy we should be – as I’ve often heard in churches growing up.

I purchased this book before I experienced my second child-loss (back stories can be found here Our Little Flower Bud, Our Babies,  Celebrate?, and Healing - Death). Having the information from this little book as a foundation when we lost our Little Flowerbud was very helpful in me dealing the aftermath of a miscarriage too.

One of the topics in her book had to do with other people.  It is sad, but true that at a time of such crushing loss and incredible pain, friends and family seem to withdraw.  It adds to the pain because a person finds themselves trying to navigate their new world of hurt alone.  Hinton addresses the reasons this often happens.  She is not excusing it, but it does help a little bit to understand “where the heck did everyone go?!?!”

After our Little Flowerbud was gone, I personally, found it to be a time of sifting.  After all the dust settled I was able to see who my true and reliable friends were.  A year later, there were some people that dropped off the list.  Five years later it has even prompted me to begin searching for a different church.

From the book (and now through personal experience) the comparison between losing a child to adoption and losing a child to death are parallel.  There are only two areas I found to be opposites instead of parallel – hope and closure.

With adoption, there is no closure.  The child has not died and there is no way to really grieve the incredible loss.  When a child dies there is closure which allows the parents to eventually go through all the grieving cycles.  That is not to say they ever reach a point where it never hurts again, but it eventually is not as crippling as in the beginning.

With death, there is no hope.  The child is gone, the relationship cannot continue and there is no hope to see them again, to talk to them again, or to watch them in any activity.  Death is permanent and final.  With adoption, there is hope.  Hope that perhaps there may be a reconnection with the lost child someday.


My final analysis in a nutshell – that “counselor” is right.  The gut-wrenching pain of living life without my son lost to adoption was so undeniably parallel to the tremendous loss of losing a child to death.

Why on earth would any human being knowingly and intentionally put another person through such a horrendous experience unnecessarily????  It is one thing for a counselor to help a person recover from such a horrific thing as the death of a child – but to willfully and intentionally push a woman into such a chasm of despair is deplorable and inexcusable!
Silent Grief


Suffering
Posted by Cheerio! at 9:30 PM No comments:


Books and other publications (pamphlets, articles, and studies)


Going back to school has zapped ALL my spare time.  I rarely have time to even garden let alone blog.  I often think about writing new posts, but the ideas mostly stay in my head.  This year I my aim to posts more regularly and post about books or articles I’ve read.

This post is just a list of books I’ve read recently (as in the past few years) plus the stack of books I have on my filing cabinet waiting to be read (or finish ones in progress).  Throughout the year I’ll post threads with my comments about an item from my ever growing reading rack. 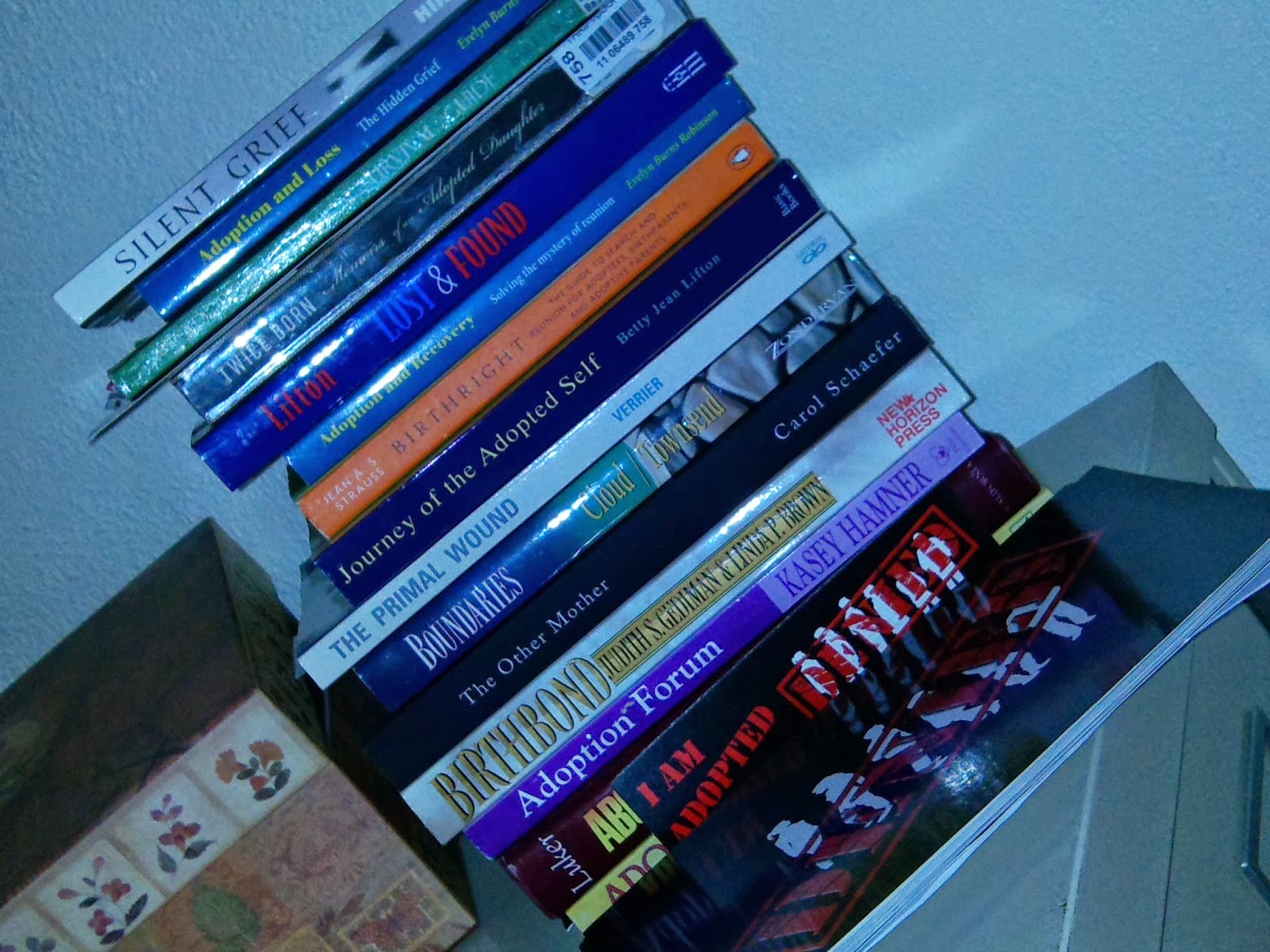 About the Adoption Experience


Silent Grief: Miscarriage – Child Loss Finding Your Way through the Darkness by Clara Hinton
Adoption and Loss: The Hidden Grief by Evelyn B Robinson
Adoption and Identity: Influence on Emerging Adults’ Occupational and Parental Goals (2011)[article] by April Moyer and Linda Juant – Adoption Quarterly
Birth Records of Illegitimates and of Adopted Children (1930) [article] by Sheldoh Howard and Henry Hemenway - American Journal of Public Health
The Girls Who Went Away: The Hidden History of Women Who Surrendered Children for Adoption in the Decades before Roe v. Wade by Ann Fessler
Journey of the Adopted Self: A Quest for wholeness by Betty Jean Lifton
The Other Mother by Carol Schaefer
The Primal Wound: Understanding the Adopted Child by Nancy Verrier
The Princess Has To Die: Representing rupture and grief in the narrative of adoption (2009) [article] by Josephine Wright – The Psychoanalytic Study of the Child
The Same Smile: The Triumph of a Mother's Love after Losing Two Daughters by Susan Mello Souza and Joanne Medeiros Harrington
Sixteen and Pregnant: Minors’ Consent in Abortion and Adoption (2013) [pamphlet] by Malinda Syemore - Yale Journal of Law and Feminism
Strengthening Adoption Practice, Listening to Adoptive Families (2007) [article] by Anne Atkinson and Patricia Gonet
Twenty Things Adopted Kids Wish their Adoptive Parents Knew by Sherrie Eldridge
Twice Born: Memoirs of an Adopted Daughter by Betty Jean Lifton

Adoption Healing: A Path to Recovery (for adoptees) by Joe Soll (I have heard conflicting reports on this author, so it is at the bottom of the stack.  I will likely read it someday.)
Adoption Wisdom: A Guide to the issues and feelings of adoption by Marlou Russel Ph. D (I started this book but it fell to bottom of stack because of what I felt was repeated subtle negative representation of original mothers.  After 5 chapters, I don’t know if I will ever finish this one.)
Pro-Adoption Marketing Propaganda
Birthmother Good Mother: Her Story of Heroic Redemption (2007) by Charles Kennedy and National Council for Adoption
The Missing Piece: Adoption Counseling in Pregnancy Resource Centers (2000) [pamphlet]  Curtis J Young 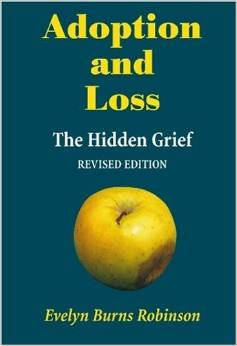 Adoption and Recovery: Solving the Mystery of Reunion by Evelyn B Robinson
Adoption Forum: Intimate discussions to unite the triad in healing by Kasey Hamner
The Adoption Reunion Survival Guide: Preparing yourself for the search, reunion, and beyond by Julie Bailey and Lynn Giddens
Birth Bond: Reunions between birthparents and adoptees – what happens after by Judith Gediman and Linda Brown
Birthright: The Guide to Search and Reunion for Adoptees, Birthparents, and Adoptive Parents by Betty Jean Lifton
Boundaries: When to say Yes, When to say No to Take Control of Your Life by Dr Henry Cloud and Dr Jon Townsend
Lost & Found: The adoption experience by Betty Jean Lifton
One Perfect Day: A Mother and Son’s Story of Adoption and Reunion by Diane Burke and Steve Orlandi
Reunions between Adoptees and Birth Parents: The Adoptive Parent’s View (1994) [article] by Silverman, Campbell, Patti – Social Work
Why Reunions Go Wrong: What Memoirs of Adopted Daughters Tell Birthmothers (article) by Jane Edwards – Origins USA

Finding Fish: A Memoir by Antwone Quenton Fisher
Rosa Lee: A mother and her family in Urban America
Shut up and Say Something: Business Communication Strategies to Overcome Challenges and Influence Listeners by Karen Friedman or fighting for legislative change for equal access to OBC )


WWII -- Unbroken by Laura Hillenbrand
WWII -- Night by Elie Wiesel
WWII -- From Zolkiewka to Israel by Haim Zilberkland
Fat Shame: Stigma and the Fat Body in American Culture by Amy Erdman Farrell
Killer Angels by Michael Shaara
Nickel and Dimed: on (not) Getting by in America by Barbara Ehrenreich
Now, Discover Your Strengths by Marcus Buckingham and Donald O. Clifton
The Blue Orchard by Jackson Taylor
The Healing of America: a Global Quest for Better, Cheaper, and Fairer Health Care by T. R. Reid