The naked ladies started blooming this week.
They were blooming last year when you died.  Aug 9th, 2013 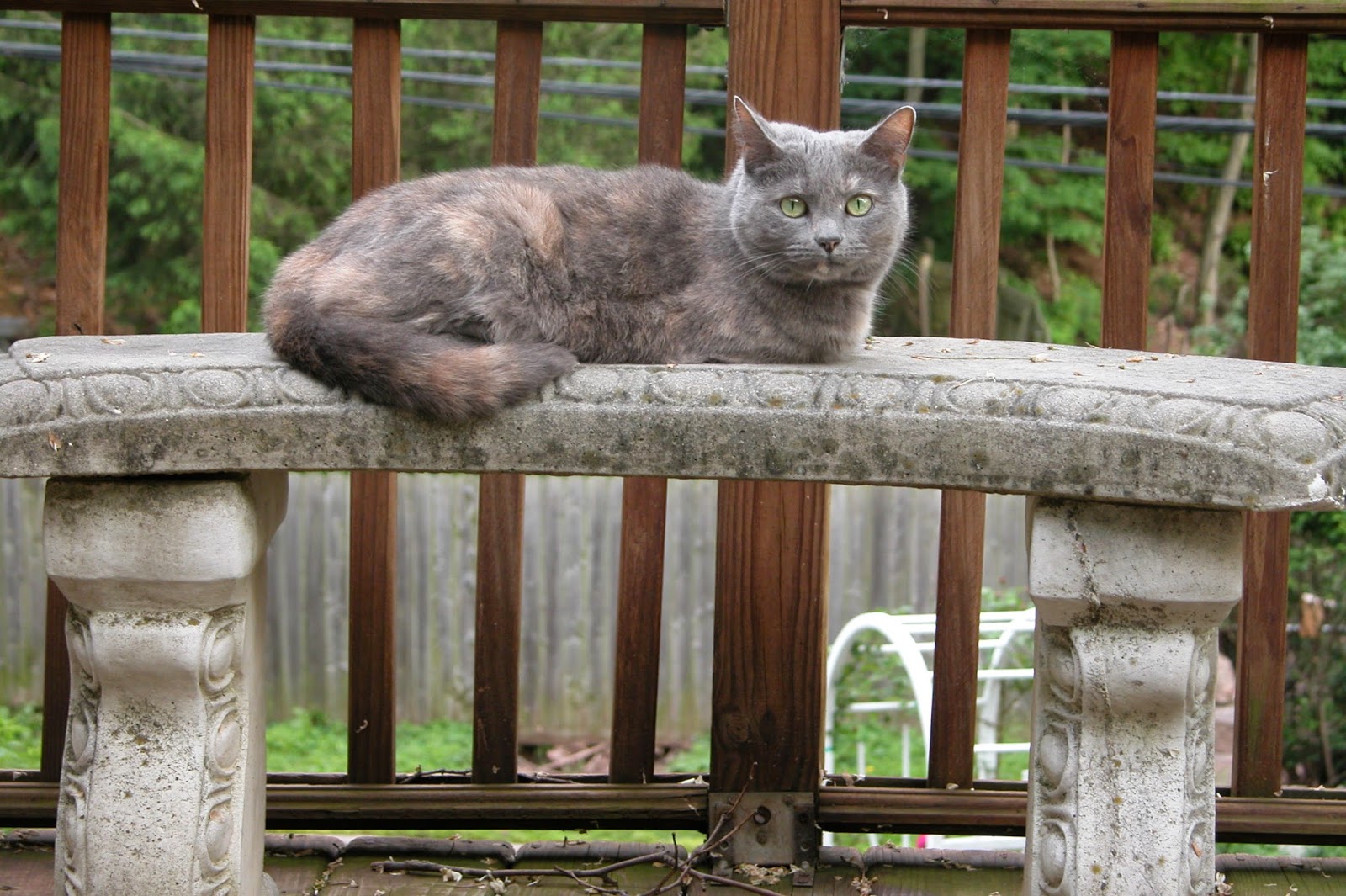 I was heartbroken and I still miss you, terribly!
A year later and I still cry when I think about you and the tears are falling now as I write.  In a hours it will be one year that I held you and pet you for the last time, comforting you as your little kitty soul was packing up to leave your furry gray home here.  A huge part of me wishes you were still here, while the other part of me would not want you to still be here and be in pain or suffering.


I try to not dwell on it but sometimes I question why.  Why did you have to go?  Can anyone make sense of death?  You were here one day and gone forever the next.  How, how can you just be gone?  Forever?  I think of that last night with you.  -Carrying you inside from the front porch and upstairs.  -Holding you, talking to you.  Remembering how I failed you in the early morning hours and I feel so guilty about that.  I’m so incredibly sorry Willow, I didn’t know, I didn’t realize you were dying.  It was stupid of me.  I should have sat with you and talked to you and comforted you sooner.  I just didn’t know.  I wish I could turn back time so I could have been there for you earlier.


Although you are gone, your little paws left permanent impressions across my heart.
The corner of the bathroom cabinet stays a stark white now that you’re gone.  You were always rubbing along the corner of that cabinet and I had to wash it all the time.  What I wouldn’t give to have to wash that corner again.  But the memories will just have to do.


I miss hearing you talk to me.
Early in the morning as I was still trying to get the blur out of my eyes you would follow me everywhere, talking the whole time!  Who would have imagined a tiny little cat could have so much to say?  Especially so early in the day!  I really miss that, your constant little meowing.  When I grumbled about you being “a morning person” I still thought it was adorable (albeit a bit annoying at times).  Mornings are not at all the same without you.


We got you as a little kitten and you were always so cute and sweet.

You could be zipping around the house, but as soon as I picked you up, you would go limp as if to say “Ok you can hold me now.”  When I held you, your little front paws would cross, like a little princess.  Yes, you became the little princess too.  Even your coat was special.  You were always soft as a bunny.  It was quite a challenge bathing you, because of that extra downy like under coat of fur you had – seemed I could never get it wet.


Most cats go crazy with the laser lights too, but not you.
It was as if it was beneath you.  Even when the other cats chased it, you were not interested in the least.  When we tried to get you to play, you would just sit there looking up at the laser pen, and then at us as if to say “who do you think you’re trying to fool?”


I miss the eye contact too.
You didn’t just look at me; you looked me in the eye and you would hold that gaze.  It was like that with everyone.  Even company commented about your “stare.”  I miss our customary greetings too.  I’d walk into the bedroom and you’d be standing on the side of the bed, I’d bend my head down and you would rub your head on my forehead along the side of my face and jawbone.  We greet each other that way since you were a tiny kitten, for eleven years Willow.


You always had the most incredibly loud purring.
It was like a tiny little engine roaring.  Often I’d wake up during the night and I could hear you purring – laying over at the edge of the bed.  It was just so loud and sometimes it was difficult falling asleep sometimes because it was so loud (and you often slept near my shoulders) but I couldn’t really get annoyed about you being that happy.

You were my little comforter too.
In 2009 when we lost our little flower bud and I was overwhelmed with grief, sometimes I would just sit on the steps of the deck.  I didn’t want to do anything - just sit.  You would crawl into my lap and let me pet you and hold you as I cried.  You didn’t seem to mind the tears falling into your soft gray fur.
Around November of 2012 I hit a really dark spot for a little while.

I was so afraid of not hearing back from Nathan.  So afraid that he would be like his original father, that he would be content with life as he knew it and not want contact.  I was really struggling with the idea of trying to go on without him in my life.  It was hard enough surviving this long and I just could not comprehend continuing to go on for countless more years with the silence.


Mr Cheerio needs more sleep than I do and so by the time I went to bed that night he was already asleep.  I was emotionally exhausted but sleep was far away as I lay there on my back and the tears just kept rolling.  I was having a lot of thoughts about death and dying.


I will never forget that night, Willow.
It is like a movie that replays in my mind.  I see it clearly.
You always slept at the edge of the bed, but that night as I lay there crying, you slowly walked up beside me.  You very slowly put one paw up on me, then another and another until you we standing on me.  You very slowly walked up and sat on my chest. You never did this before.  The whole time you were looking into my eyes, even as you sat there.  I started to pet you and eventually stopped crying.  You lay down and started to purr.


It was as if God knew how much I needed comfort,
and He sent you, this cute little gray cat, to help me.  From that point on for the next nine months every single night (except for the last) you would curl up on my chest.  I pet you and you purred.  You stayed there purring until I fell asleep – every night.


Once I fell asleep
you’d leave that spot often moving to the corner of my pillow.  When I woke up through the night, I’d hear you purring on my pillow and I’d pet you until I fell back to sleep. I think this solidified our bond, Puff Girl.


After your little kitty soul departed, it was too quiet everywhere!
The silence was deafening.  Like a vacant house, every sound echoed the emptiness.  The other cats don’t meow like you did.  They make these strange little meeps and murps and sounds in their throat, but not actual meows.  But the hardest part was getting to sleep at night.


Not only could I no longer hear you purring,
but the little purring vibrations were obviously gone too.  I couldn’t even sleep in that room – “Willow World” we called it.  I would just cry walking into the room.  When I did finally fall asleep, I’d wake up realizing I was petting the corner of my pillow, where you used to sleep.  I finally retreated to the guest room for several months, just so I could get some sleep.

I lost you in August,
our little flower bud in September,
and Nathan’s birthday in October.
I was worried about facing another birthday and holiday season without you.  You were my comforter in very dark and heavy times, what would I do if I hit another dark period since you’re gone?  I was actually concerned about that.


For Nathan’s 19th birthday last October
we sent a gift directly to him at college and we sent his Christmas gift early – so he would have snacks to munch on while studying for finals.  In the packet of pictures I sent, there were pictures of you too. I wish he had gotten to meet you and you him.  I also wish you were here to share the joy with us my Little Princess, when he actually sent us a snail mail letter in January of this year.  We have mailed a few letters back and forth.  So, I think the darkest part of the silence may be gone and I should be okay to face the upcoming fall season of losses and holidays to endure.


As the one year anniversary is getting closer, I still miss you.
I wish I could hold you again.  You were a best friend and I will always miss you my dearest little Pussy Willow.

My hope is that I can make a meaningful difference in people’s lives that when my time is up, maybe someone will miss me just a fraction as much as I miss you. 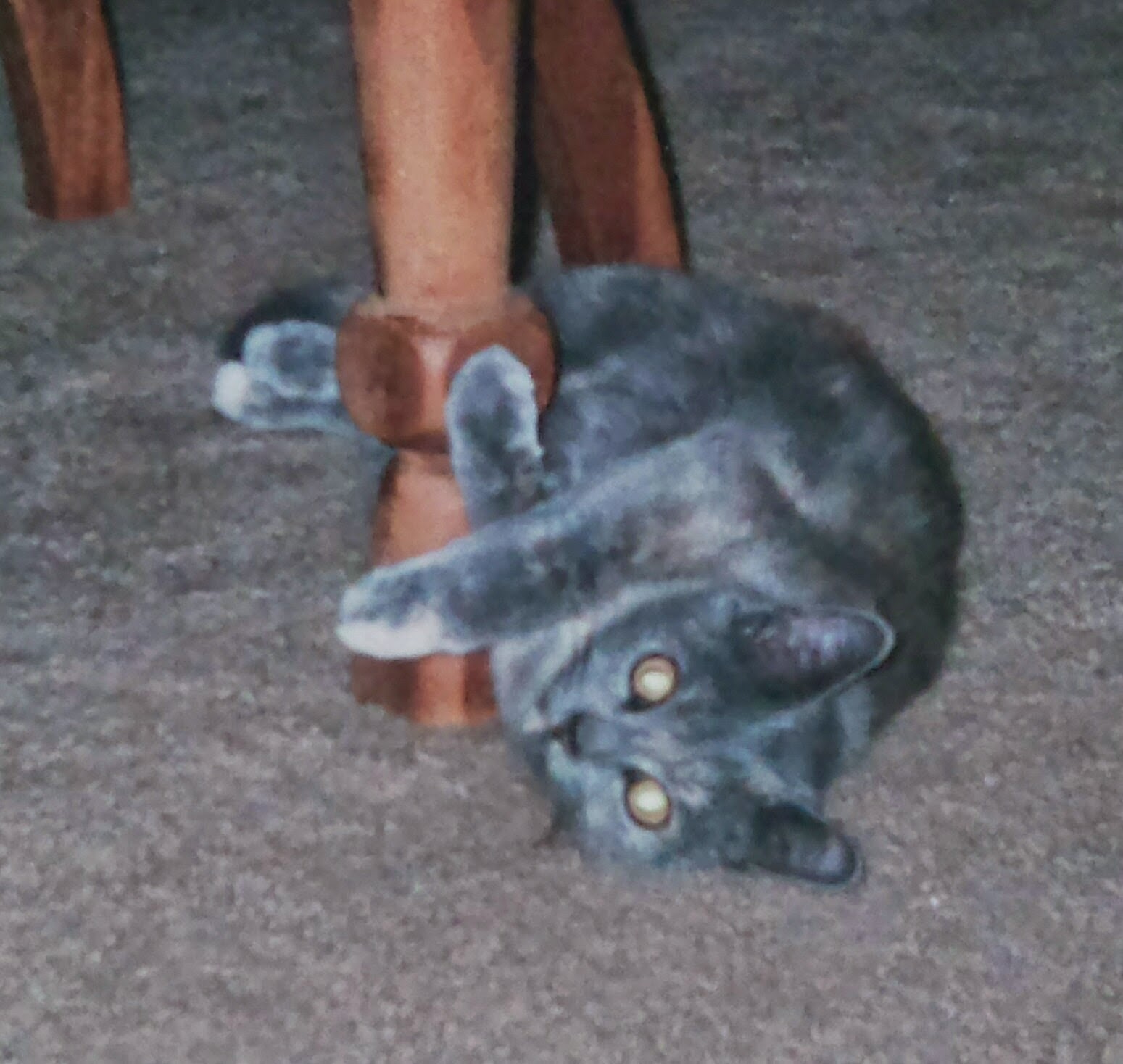