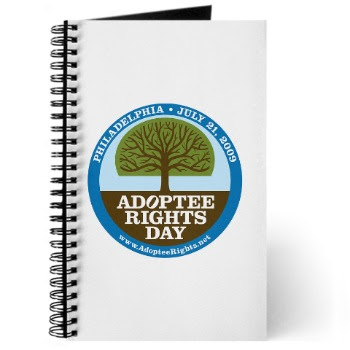 As I was driving home,
I was contemplating my son's next Christmas gift. And, yes. I realize that it is only February.
Christmas 2008 I sent him a journal with the intent of sending a new one each year. It was hard for me to pick out that first one. I ended up buying a blue spiral bound journal with robots on the cover. I thought robots would be cool since I've sent him “assemble yourself” Robot Kits the past few years for his birthday.
I keep thinking about the journal for sale on the Adoptee Rights Demonstration cafepress store. http://www.cafepress.com/AdopteeRightsPA.349212525 With my unexplainable paper fetish, on my first visit to their store, I of course scoured the entire on-line store highly doubtful they would even sell a journal. I quietly squealed with delight when I saw they actually had one! Yay! I guess there is room for nutty journal hugging people like me. Although I'd like one of the journals for myself, I really want to send one to my son next Christmas. So, as I'm driving along, in my mind, I'm going over the arguments -- back and forth --trying to evaluate all the possible risks of sending him such a journal.
Now, here is a (will be by then) 15 year old boy, who is the younger of two adopted sons. I have sent letters and gifts to him from the beginning. I got updates and pictures from the aparents at first. When he started school is also when the communication became a one-way street. The aparents "weren't interested" in sending anything to me anymore.
Back when they did send me pictures, they always included pictures of him opening the gift I sent, or of him reading the card/letter. I hold to this thought and believe he still gets the gifts and letters. I might be wrong, but I'm going to just keep hoping, and keep on sending.
I only mention this 'one way street' scenario, because I don't hear from my son - EVER. Once when he was a few years old, his amom sent me a letter where he wrote his name at the bottom of the page. That is it. Period. End of chapter. Nothing else in the box. What are you still standing in line for?! there is NO MORE!
Which all boils down to the reality that I have no idea where he is (or his older abrother, or his aparents are) regarding the 'A' word. [The 'A' word, meaning adoption.]
I want to send him this journal because I want him to think about adoptees’ rights - about his rights. Maybe at 15 he isn't too concerned about his rights. But by next Christmas if his brother isn't 18 yet, that 18th birthday won't be too far away.
Maybe this tiny little journal might spark something in his mind to start thinking about his rights, his needs, and his feelings too. Things that he may have been told he "should not" think or feel, but if he were honest, he'd admit that it’s still there, even if it's hidden very deep. As I am reading more of what adoptees share, it totally dumbfounds me that non adopted people simply don't care about the unique 'burden' that an adoptee carries.
I read over and over again that adoptees are basically told what NOT to feel or think, and and how they SHOULD feel or think instead. And, well, I guess I'm hoping that maybe a journal to my son, highlighting Adoptee Rights ... well, that maybe it would cause him to consider that I don't want to do that. I'm hoping that by showing that I'm already thinking about adoptee rights, my focus would be on him and his "needs".
If I sent him this journal, maybe he would Google Adoptee Rights Demonstration, and there he might find other adoptees that he could connect with.
What a guessing game it is too of how his aparents would feel about a journal with ARD logo on it? How do they feel about adoption records being open? about them being sealed? If they haven't thought about it - it wouldn't hurt for them to give it some thought.
I'm driving and pondering it all.
Then it dawns on me ... he'll be 15 years old next Christmas.
I have only 3 more Christmases! After that, he’ll BE 18!?!?
I've survived this long - I will survive the following years also.
I still hesitate. It's kind of risky - his aparents don't communicate with me at all. Hmmmm, "as an old wise man once said, 'It's better to ask forgiveness than permission.'" [Do you recognize what movie this quote is from? I’m working on a post about this movie & hope to have it up on my blog soon.]
nutty journal hugger
Posted by Cheerio! at 12:33 AM