In Cheerio’s world, things don’t follow a normal predictable pattern. In fact, it’s better to expect the unexpected. I’ve posted twice about the Adoptee Rights Demonstration which was on Sunday, you’d think the normal would be to proceed to events Sunday evening. But NOT in Cheerio’s world! We are going to instead push the clock hands wayyyy back to Friday. Friday afternoon, 7/9/2010 is when I arrived in Louisville. 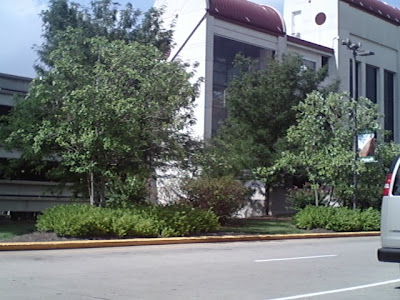 Waiting outside airport for hotel shuttle

It was nice and warm sitting outside waiting for the hotel shuttle to arrive. I admired what another woman was wearing. I don’t know what to call it, it wasn’t a sweater, or hoodie. It wasn’t a jacket, sweatshirt, poncho, or scarf. It was sort of like a shrug. I so wish I had taken a bunch of pictures of it so I could make one for myself – whatever it was! It was BRIGHT orange, almost like my fingernails. It draped over her shoulders and flowed down almost to the ground. In the back in only covered her neck and trapeziums, but ended about her lower back. It was like a wide scarf, which was sewn along the edges for sleeves. It had a relaxed loose fit, and was made of a lightweight material. I’ve GOT to make one for myself! But then I’d probably be too self conscious to wear it in public. Hers was made of a knit, but I’d use a lighter material, maybe muslin or something else light weight. I actually was admiring hers while thinking it would be PERFECT to wear on the day of the Demonstration to keep the sun off my arms. 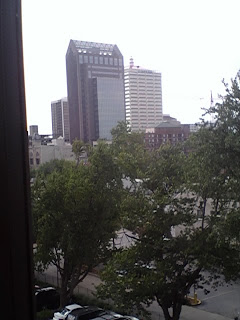 My Roomie was driving up from Miami and hadn’t arrived yet. So I checked in and dragged my stuff up to the room to unpack before she got there. I picked the bed closest to the door so I could slip out for my coffee first thing in the mornings.

I used one dresser drawer and hung a few things like my “don’t go anywhere without it – puff vest”, winter hoodie, sweatshirt, and my bright orange wind breaker. (Yeah, everyone packs a winter hoodie when the weather forcast is 99 every single day!) I was done unpacking and had eaten most of the gingersnaps when I got a text message from JimM that he’d arrived. I made my way downstairs to reconnect with friends, and hoped we’d head out for some supper soon. As we were talking grub, my Roomie arrived. I helped them unload their pickup truck and then the three of us went out for dinner. End Friday. Saturday morning I woke up early and slipped downstairs for my morning coffee. I expected to bump into others from the group (which is what happened every morning in Philly). But I guess I was up too early because no one was downstairs, not even outside for a smoke. So I decided I’d have my coffee and have a good swimming workout. WeeHaa. After my swim and my 2nd shower, I went back downstairs for breakfast and there were people from our group everywhere! It was GREAT! Breakfast with the B@stards is a very memorable experience. There’s not a bunch of catty bickering, just a lot of hugs, sharing, listening, and caring. After breakfast folks were planning their days. I asked if I could join the crew headed out for our pre-march walk, to test the path of our demonstration the following day. It was a nice leisurely walk and we even had time to stop and take pictures, like this one. 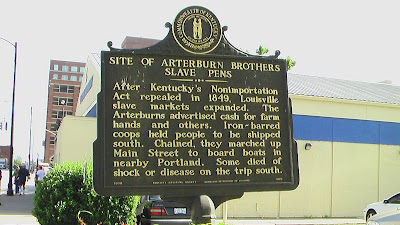 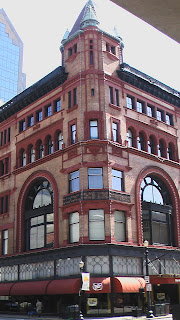 and this snowy one too... 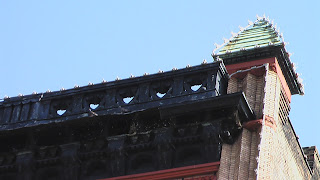 ...doesn't it look like snow sitting in the divits? Well! it did to me!

The Authority decided that since we were there, we may as well go inside and pick up the group’s badges and check out the booth. I knew that I was not in any of the time slots to man the booth during the convention, and I felt honored to be able tag along with this group of determined, fearless, and persistent folks who are fighting tirelessly for adoptee rights. 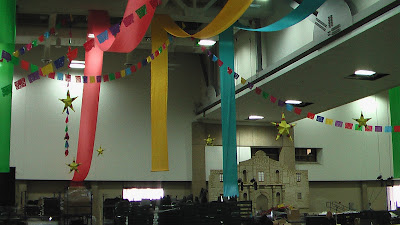 After that excursion, a bunch of us had lunch on forth street. The salmon on flatbread was excellent! I’m still not too sure about the fried pickle though. I got back to the hotel in time to change and get ready for the sign making party that night. Will post on that later!
Louisville,
Here
We Come
!!! 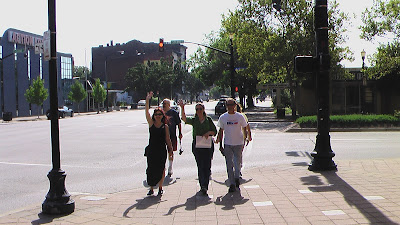