Saturday after a hard day's work of gathering and loading up trucks of firewood, I finally agreed to let him see if he could catch two kittens from the feral cats on his property. I was hungry and I was tired. I agreed because I didn't think he'd be able to lure them into a carrier in a reasonable amount of time. I completely underestimated his skill, because in no time he had both kittens in a carrier and we were loading them into the cab of my truck. As I drove home, I was surprised that they were quiet - not a single meow. Allthewhile, I was thinking, "O great. Now what?" I've been to his place a bunch of times before. The last time or two that I've been there, I enjoyed watching the new batch(es) of kittens. There was an assortment of little furr balls, including two yellow kittens. He described one of the yellow ones as "very friendly." He pointed to the little Cutie I'd been watching, and mentioned it is also very friendly and they are probably litter mates. The little Cutie didn't bolt at first sight of me. I could get closer to it than the other cats; although, it would dash away at just the last moment. I'm sure this little Cutie's had my attention because the color pattern reminded me so very much of our Monster Paws. I felt mezmorized when it would look me in eye and hold that gaze. Since these were outdoor -(not really wild - but not tame either) cats, I didn't want to mix with our indoor Pussy Willow, at least not until the kittens are checked out by a vet. It was already quite apparent they had fleas! So, when I got home, I pulled my convertible out of the garage, and turned it into a temporary home for the kittens. They were both still quiet, but neither one came out of the carrier. They would allow me to reach in to pet them, nevertheless they would not come out so I left the carrier doors open and left them in the garage for the night. That was Saturday night. Sunday morning, they were both of of their carriers and hiding near a shelf. I should have left them alone so they wouldn't look for another hiding place. Alas, hindsight is always 20/20. Near the shelf they were fairly easy to see and get to. But their new hiding place became the lawn mower in the corner. By Sunday night, the little yellow cat came out. 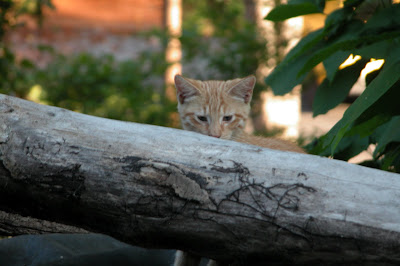 "Very Friendly" ha! that doesn't begin to describe it! This kitten was purring and kneading his little feet like there'd be no tomorrow. He would rub my arms and wanted sooo badly to be petted. It seemed he could not get enough petting. In fact, he wasn't even interested in eating! It is now Wednesday and little Cutie still won't come out from under the lawn mower while I'm there. It is akward every time I pet Cutie. Morning and afternoons I go in and get on hands and knees. I lean my face to the floor and peer under the lawn mower & sure enough there is a kitten under there - Still. What a weird thing to reach under the lawn mower to pet a kitten. She's not afraid when she's in her own space, she rubs against my hand, walks all around my hand and rubs along my arm. She'll even lay across my arm or in my open hand. But she is just not intersted yet in coming out from under that lawn mower! This morning I noticed that one of the whiskers of the yellow kitten was short, like it was cut. Then as he sat in my lap, I noticed several of them look shortened. I wonder, is he soo uber full of love that he's shaved his own whiskers off by rubbing agains the lawn mower blades too hard? What a funny cute little cat. I've been calling him Tommy, because that is what my Grandmother named a stuffed yellow cat I got for her when she was sick. It may not be an creative name, but I'm pretty sure it's a boyo. The other one, I'm not sure yet. It's hard to tell with the lawn mower in the way. Tommy Tom Tom got all comfy cozy this morning when as I sat in the garage to read. He rubbed all over my arms, along my feet, crawl up in my lap. Very friendly - Very cute. After awhile I realized that he was still, and I hoped he didn't fall asleep. I would have hated waking him up, but it was definately time for me to get ready for work. So I shuffled a little and he leans his head waaaaaaay back and looked up at me. His eyes were barely open and it was the sweetest thing as he just stared at me through those sleepy eyes, sort of watching me as he was falling back to sleep. I was aware of the emotions that it evoked inside of me. I felt like this little kitten was just so precious and sweet and beautiful. Like I wanted to protect him and take care of him, and cuddle him and make him feel loved. And I wondered to myself, if that is what it would have been like had if I not lost our wee one last year? If she had joined us, is that how I would have felt looking down at her in the crook of my arm while she was falling asleep? What color would her eyes have been as she would have looked up at me through those tired and sleepy eyes while falling contently and peacefully to sleep.