Candy Wrappers and Miracles at the Sign Making Party

There is this tradition with the ARD that I need to share about. It is the traiditional “Sign Making Party” [SMP] the night before the actual demonstration.

I like this tradition, a LOT. In fact, if anyone is considering joining for a Demonstration in the future, you must, must MUST participate in the SMP. Why? What’s goes on that someone absolutely MUST be there? Well, let’s start with the obvious, since that’s a part I often overlook. We make signs, yup, signs; as in the ones to be carried during our demonstration the next day.

We all pile into one room with poster board, paint, markers, glitter, sticks, staple gun, and duct tape. At some point pizza is brought in to refresh the starving and weary. We also review the route and listen to instructions for the demonstration.

I don’t know whose idea it was, but this year there was a mini talk on what to say or not say, suggestions for breaking the ice, etc. I found this to be very helpful, because I tend to clam up around strangers and since I’m a newbie, I’m worried that I might say the wrong thing(s). A point was made during this ‘workshop’ that I’ll come back around to in another post. So, Hats OFF to the person who made this suggestion! Loved it!

During the Sign Making Party is also an opportunity to help with other tasks for either the demonstration itself, or for the booth at the convention center.

Since I like being a behind the scenes invisible helper, I didn’t mind doing tedious things that don’t get attention or accolades. I just want to help, and if folding t-shirts helps free up another person to do something else – I’ll fold t-shirts. And, why stop at folding t-shirts when you can get thousands of paper cuts from folding miniature candy wrappers? Just kidding, I don’t think I got any paper cuts, but not kidding about the mini candy wrappers. Potential for paper cuts was definitely there! 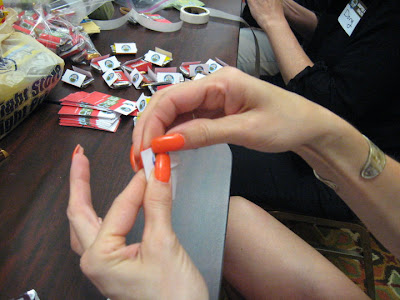 I don’t think it’s obvious, but in the picture above, there were bags and bags of miniature candy bars (Hershey Chocolate, Mr Goodbar, and my personal favorite the Special Dark).

She also threw herself into the project with printing various slogans such as; “Separate is not Equal,” “Restore our Rights,” “Why is my Birth Certificate Sealed?” and other catchy phrases.

As if designing and printing them was not enough, she had already re-wrapped 600 of these sweet little goodies BEFORE the sing making event! (I did not ask how many she ate in the process.)

It was a beautiful thing to behold that she saw the importance of keeping the colors together in their own separate zip lock bags (I’m sure it is what I would’ve done too). Shocking as it sounds, I was able to actually sit (sort of) in one place (most of the time) to help fold these. Using the glue dots was out of my league apparently. I tried one candy wrapper and ended up with several glue dots on my nails, fingers, and other hand.

While folding the Candy Wrappers, it gave me the opportunity to just observe and listen. It was the time I could look around the room and see unfolding before me the absolute best part of this event. Sure, other things are nice, making signs, eating pizza, educating each other, and taking pictures of Dan the Biker Glitter Man ... 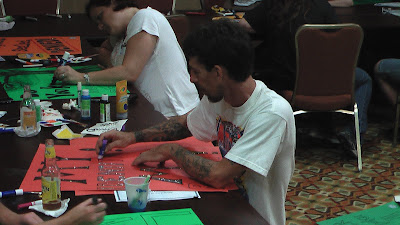 but the most important thing,
I think,
that happens at the SMP is the bonding.

There is a great deal of irony in this, because bonding, trust, and building relationships is something that I’ve heard many adoptees express difficulty with throughout their lives.

No, this is a place and time that they can truly open up and talk honestly about what being adopted means to them. Some endured abusive homes growing up, some grew up feeling like they did not fit into their family, some grew up with all the love and care a kid could ever hope for, yet they still feel the same deep loss of their original family, as the others feel.

And as I sat there folding Candy Wrappers, I get to witness this miracle happening right before my very eyes.

There may be one or two people who are still foggy with pro-adoption rhetoric, but they are not the majority. Hopefully they’re wise enough to see what is going on around them, and that pro-adoption rhetoric surfaces pain, not healing. Hopefully they’re wise enough to learn from this event and would walk away with a different perspective, a different viewpoint and begin to question their own loyalty to a practice that produces such heinous results of lifelong pain that grips a person down to the unreachable depths and core of their being.

But there are only a few of ‘them’. It’s their loss, really to be on the outside of the circle.

On the inside there is laughter, hugs, some tears, a LOT of understanding, warmth, acceptance, openness, and I dare say … Love.

Candy Wrappers and Miracles at the Sign Making Party
Posted by Cheerio! at 5:49 PM