I was talking with a classmate the other week when we were on a short break.

Having been in class with me since 2013, she is well aware of my passion for adoptee rights.

She shared with me that a close relative is adopting a child.

Adopting a child from foster care.

She was saying that her relatives wanted an open adoption; however someone (from either the agency or a caseworker in child welfare) STRONGLY discouraged them from doing it.  Their reasoning?  Her relatives were told that if they do an open adoption, the mother can come back later at any time and take the child away from them.  So they decided to do a closed adoption.

As we were talking, I told her that this information is COMPLETELY FALSE!  (Please, if anyone knows differently, start a discussion here.)  I told her that once the original parents sign the relinquishment papers they have thirty days (in Pennsylvania) to change their mind.  After that thirty days, it is over, they legally cannot get the child back.  I expressed outrage that this person giving them advice was bullying and frightening them into a decision for a closed adoption, when the family really wanted to provide an open adoption.

Later in our conversation, this classmate also mentioned that the original mother has a newborn.
She was told to either “voluntarily” sign the relinquishment papers for the older child,
or they would take the newborn from her. 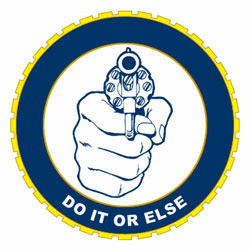 “Wow, there was no coercion involved , was there?
That was a totally a voluntary choice she made, wasn’t it?”
[I don’t think my classmate really thought about it
until I mentioned coercion.
Hopefully it sunk in.]