There is no better day of the year for Cheerio to have made her grand entrance into the world than April Fool’s Day (April 1st), it matches my character perfectly.


Being a prankster is apparently a genetic trait.  I got it from my father, and he got it from his mother.  For him it could have been learned behavior, but I say it’s genetic because I did not grow up with my father and the more I get to know him, the more apparent it is that the apple did not fall far from the tree.


For my birthday last year I got a tattoo.
It was fun watching people try to decide if it was real or not.


It was not a rash, spur of the moment thing.
I wanted a tattoo to represent my son, and I thought about it for several years.
Another original mom friend commented against it, “What if he[my son] doesn’t like tattoos?” was her thought.


So I finally sketched out a design, and the tattoo artist tweaked it a bit for me. 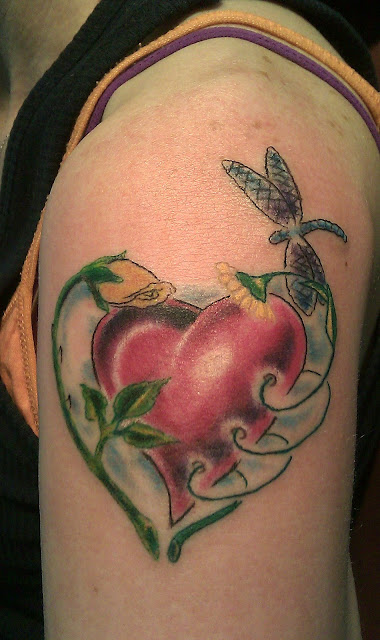 Here’s the symbolism of my ink
Two hearts:
-the love between my husband and I

The unopened yellow rosebud is confined within the heart:
-our little flower bud, who will never bloom into her own independent person.
-she was only a life known only by my husband and I.

The calendula spirals piercing both hearts:
-calendula is the October birth flower
-our son was born in October.
-my love for him grew as he did, and life without him constantly pierces my heart.

The dragonfly is moving from the outside of the heart:
-symbolizes our son, who was raised outside of our home.
-hopefully someday (soon?) the separation and him being on the outside with no direct contact or communication, will end and a mutual relationship can grow.

It is on my left arm, close to my heart.

April
Fools!
or
NO?