my little hike on the mountain

today is Saturday, 1/16/2010 it was above freezing for a few days here the ground thawed enough that we could burry our Monster Paws it, of course was sad...I was so thinking that I don't want to do this again anytime soon Early evening I took a short hike up the mountain. I needed to swap out the rechargable batteries with newly charged ones, and swap the memory cards in our field camera. on 1/3, I picked a new location for the camera, up where we planted 30 poplar trees two summers ago. it's a fairly good workout getting there, since the mountain has a nice grade.

I've been practicing how to sneak up on the deer, since I know they'er often in that area. As I was slowly walking along, I heard someting on the slope above me. I figured it could've just been a bird, until a twig snapped. Birds don't usually snap twigs. I'm sure it was deer, but there was a lot of brush and I couldn't see it. After a few moments of supsense and disappointment, I continued up the path. Then I saw a few deer playing ahead of me. They were in the area of the young poplars. There were at least two deer that I saw, maybe a third. I stood there for awhile watching from behind a medium sized tree. When they seemed to be gone, I continue my hike. I was slowly making my way up to the camera, and I heard a sound. I heard it again. I thought it was a bird calling. But after hearing it a few more times, it sounded more like a goat or sheep bleating. I decided to move close to some brush instead of being out in the open. Sure enough a deer comes to the edge of the clearing, bleating. I've heard deer snort lots of times. That's what they do to warn each other of danger, but I've never heard them call like this. I wondered if i t was a young one that got separated from the herd. It couldn't have been too young, because it ididn't have spots, might have been a two-year old. So, there I was, crouching behind this brush, peering through the overgrown vines watching this deer. It didn't see me and was headed straight towards me. It walked past the field camera, and I hoped there was enough juice in the batteries to get a pic. At one point the deer was suspicious. I could see it looking my way. I think deer are color blind, so it couldnt see my orange hoodie or my blue jeans. But I'm sure that it noticed here was an unusually dark gray spot in the brush where I was. Not sure how strong my scent was. I tried to keep my mouth closed, because I was chewing mint gum. I'm sure a mint smell would not be normal to them at this time of year. But it didn't frighten the deer away, and it walked closer and closer. It was actually on the other side of the brush where I was. I was hunched over and trying to not move a muscle. I was watching toward the spot where the brush ended. When the deer got to that spot, it looked right at me. There was no brush between us and I was almostl completely exposed when the deer saw me. It was only 10 feet away. I could see it's big dark eyes look right into mine. If I had been a hunter, I'd have had a perfect shot. The deer was completely startled. It hunkered down and bolted several yards away, then stopped. Once it stopped, it turned around and kept watching me. But from it's new view point, I was mostly hidden again by the brush and overgrowth on that side of me. The growth was sparse enough that I could still easily see the deer. It watched me, and even walked back my direction a bit. It paced around, watching, stomping the ground with it's front hoovest. It wasn't alarmed, because it did not raise it's tail at all. Finally it just continued it's way down the mountain. I waited until it was completely out of site. I'm told deer are very much creatures of habit. And if there are frightened, they won't visit that area again for a long time. Since this one was just surprised, I didn't want to frighten it too. After it was out of sight, I waited quietly a few more minutes, then headed toward my camera. When I walked up to it, no lights came on. Just as I figured, the batteries were dead - no recent pictures. I swapped the cards and batteries and readjusted the camera's aim. 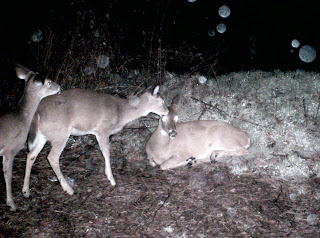 I lingered there for a little while, leaning on the small tree. I thought I heard something moving about in the woods beyond me, but that brush was much taller brush, and I couldn't see a thing. Finally the birds got to moving about and chirping, and I decided it was time to go. I was slowly making my way down a slope when I heard a deer snorting -- several times. I could not see anything, but I knew it could either see or smell me. I sank to the ground behind some brush and waited. Then I slowly stood up and tried to peer over the brush, and the deer started snorting again. I tried to sneak back up the slope hoping to see something, but no such luck. 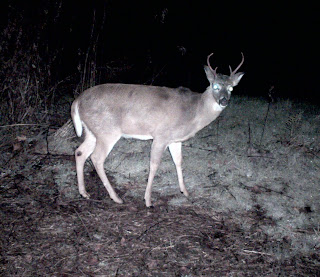 It was getting dark quickly, and I have no night vision, so I decided I'd better call it an adventure and get home. On my walk the rest of the way down the paths, I could hear a hoot owl. I don't remember ever hearing a hoot owl here before. So that was my little journey tonight. I can't wait to see what kind of pictures I got.
Posted by Cheerio! at 10:43 AM