A dream, with fur, fear, and tears

I am a cat nap kind of person. In the summer I’ll often go out to my car on my lunch break and take a cat nap. I'll usually wake up in about 20 minutes without setting an alarm. Those 20 minutes will give me an extra boost for several hours. Today I fell asleep and woke up clearly remembering the details of a dream. In my dream I was outside with my friend, Linda. We became very good friends when I was in high school. Back then I was a big horse lover. I was always reading horse books, wrote short stories about horses, and often paged through my horse encyclopedia learning everything about them, about the breeds, their anatomy, and best practices on how to care for them. I greatly enjoyed the Horse Illustrated magazine. I love the dish shaped face of the Arabian, and their slender features. I appreciated the stamina and strength of the Morgan, and the quickness of the Quarter Horse. In my dream we were outside near the horses. We were at the inside angel of a corner. The electric fence wire was in front and beside us. Linda was reaching over the fence petting one horse. There was a second horse at the other fence, it was a dark color. Since it was cool out I had my hood up. This eliminated my peripheral vision and reduced my hearing. Whenever I would turn my back on this horse to face Linda, I was filled with a fear of it. I was constantly turning my head to look back at it, afraid that it was going to charge or attack me. Each time I turned toward my friend Linda, a great wariness would boil up in me. I kept thinking I heard footsteps coming toward me. But each time I would turn and look, the other horse was behind the fence where it should be. Suddenly in my dream Pokey was there. Pokey was a pony I acquired when I was in 7th or 8th grade. We were a poor family growing up. My Mom labored hard as a single mom in a blue collar job. This was back when men resented women working a “man’s job.” When she worked in the steel mill, the men would often comment to her that she should not be there – she was taking a man’s job, and she should be home making cookies. Granted, my mom was good at making cookies. But if our father had been a real man and had taken care of his family at the time, my Mom might have been able to stay home making cookies. She might have even preferred to be home. But the reality of it was that she didn’t have the chance to be a housewife, she was a laborer instead. My mom also worked at a glass factory. One of her co-workers found out about a pony that was being abused and neglected. They knew I was a horse lover and asked my Mom if we’d want to take this pony, for free. Of course, she knew right away what my answer would be. Now, mind you, he was a pony – not a horse. He was a typical adorable little pony. He was brownish with dapple white spots. He was just the cutest thing when he got his very fuzzy winter coat. He had alert bright eyes and a white main and tail. His back was not much higher than my own waist. 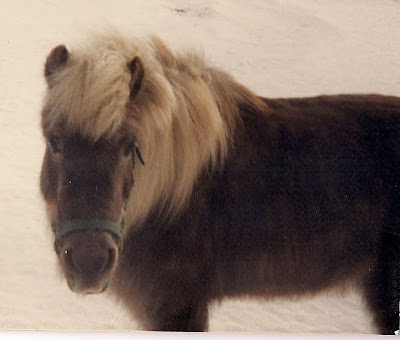 We brought this pony to the house my Mom was renting. It had a half dilapidated two car garage. We only had one car, so we converted the other side into a ‘barn’ for the pony. I poured all my love and attention on Pokey. It was a bizarre sight to see me ride this pony. I was thin and weighed almost nothing, but I was not short. If I rode in the snow and let my feet hang, there would be the expected hoof tracks in the snow with other mysterious tracks outside those. Those two mysterious trails were where my toes dragged. It was not a charming site at all. But that didn’t matter! He was able to carry my weight without any trouble. We moved twice after we got Pokey. One time my Mom moved without me. I waited until someone could come with a trailer to get Pokey, and then I moved with him. It worked out nicely that a man who was involved with 4-H allowed me to keep Pokey in his barn without charge. In return I helped muck the stalls and went with them to get grain and sawdust. I’m very thankful to him, because we could not have afforded to pay for boarding. The barn was about 2 miles or so from our new house. I would walk there and back every day to care for him. Feed him, brush him, keep his stall (and stall of other animals) clean. Now that we were living in a more rural countryside, there were a lot of fields. I was able to ride to my hearts content. One year I was going on a trip with the school, and we had a fund raising event in a nearby store parking lot. They had a bake sale and car wash going on. Someone allowed me to borrow a saddle and I hosted pony rides. So Pokey helped me raise money for my first trip to Texas. When we moved from there, our new place was a few doors down from a small farmstead. He’d sold off most of his land years before, but kept some for a few head of steer. He allowed me to keep Pokey in his barn at a very small fee. I wanted to go to a private school, so I got a job. I worked the in the dining room and doing dishes at a nursing home a few nights a week to pay the tuition and uniform costs. In the summer I also worked during the day. Some years I worked at a local swimming pool, another year I worked in office at the Military School in town. This meant I had less time to spend with Pokey during the school year, but we made up for it in the summer. With all the hoorays of High School Graduation dies down, it meant a new chapter in life. Turning the page meant going away to school. I found a very small Bible College on the other side of the state. I was at a dilemma. What about Pokey? I had gotten to know the Spanish teacher at the private school. Her husband loved horses, and even had a few. They had three young children. My teacher’s name was Linda, and I gave Pokey to her and the family. 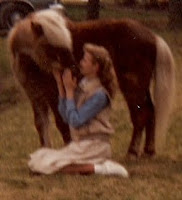 The very last day I walked up to the barn to feed Pokey, I took a tape recorder along. I still have the recording on a cassette tape of that last whinnied greeting. It brings tears to my eyes even now to think about it. He wasn’t just a pony. He’d come to mean so much more to me. He was my best friend through the years, and through all the moves we’d made when I was a teen. I loved him and he was so special to me. Oh, how hard it was to say goodbye to him! That was many years ago. Linda's family loved on Pokey and took good care of him for the remainder of his life. So, there in my dream was Linda and Pokey. After Pokey suddenly appeared, he was behind me and nudged me in the back with his nose. But it was not a normal little nudge, but it was a superhero kind of nudge. It threw me and I went flying up, high into the air. As I was flying up, the fear of heights gripped me as I was higher than the trees. I despise the falling sensation, and this was what I was feeling next. As I was feeling those fears and sensations, I saw that Pokey was not standing on the ground. He was right high in the air right behind me. So, I could not get mad at him for throwing me up there, because we were in it together. And I said to him, “well, at least you’ll fall with me.” I remember the falling sensation in my dream. I don’t remember landing. But next in my dream I was on the ground. I was sitting back on my heels and my upper body was doubled over nearly touching the ground. My arms were bent and pulled in tight to my sides. My hands were gripping something above my head, which was down on the ground. In my dream, I was crying. It was not a little cry, but it was a broken cry that came from deep within. It was one of those cries that your whole body is tense and the only words to be heard are are little squeaks that make it over the much tightened vocal cords. I was crying and talking about my Monster Paws, and him being gone. When I woke up from my dream, the details were just so vivid. When pondering it, I realized the significance of Pokey being there. I have not thought about Pokey for awhile. But I guess losing Monster subconsciously took me to the room where my Pokey memories and feelings are. Pokey and everything about him is cherished, preserved, and stored there. And I think that is the same place that all the Monster Paws memories will be stored, preserved, and cherished.
o that’s my dream, with Fur Fear and Tears
Posted by Cheerio! at 5:55 PM