From ‘Closet Creep’ to ‘Cannon Ball’ 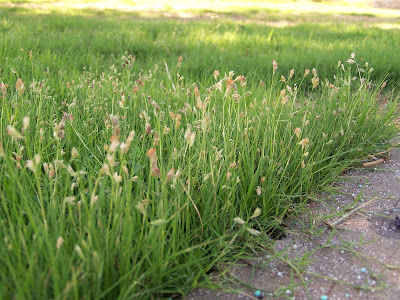 There are many things that contrast my former neighborhood to the ‘new place’ we live. Sidewalks are one of those things. We don’t have them here.

I recommend you Do NOT bend down to look in your mailbox if a car is headed down the road. If you do, your rear end might be on someone’s front fender.

In my former neighborhood the widowed lady across the street was an amazing fiery respectable woman. She also had a manicured lawn. Faithfully she edged along the sidewalks to ensure that the grass stayed in its place and did not creep out beyond its borders and spread out on her sidewalk. She was very adamant that there would be no grass creep while she was on duty!

Grass creep, you know, that’s when the grass grows over the edge of your sidewalk and in time your sidewalk gets narrower and narrower. If left unchecked, the grass will grow completely over the sidewalk hiding the fact that a sidewalk ever even existed.

In April I wrote a post “Cheerio sticks her neck out.” In that post, I described myself as an “in the closet first mom.” Basically that no one in my day to day life knows that I have a child, a son whom I lost to adoption. Since he was my only child so far, the natural assumption people have is that I’ve never been pregnant.

There are a lot of excuses as to why it is people don’t know. The very select few that do know have just brushed it off as me being “a private person.” But to be completely honest - fear is the biggest reason. In April’s post, I described that my on-line friends (other first moms and adoptees) are gently coaxing me out of the closet.

While I was writing that post, I had light bulb moment.
Instantly it became crystal clear to me that the money grubbing adoption agency wants me to live in fear and to keep to myself. They WANT me to keep the closet doors shut. Even more importantly, they want me to keep my mouth shut.

Rather than seeing me ‘find healing,’ what they really want is for me (and other first moms) to be paralyzed by the fear, to be quiet, and to stay hidden. So, if I stay in the closet, that makes them very happy.

After that postl, I experienced a bit of, what I’ll call ‘closet creep.’ Just like the grass that slowly crosses that line to where it is not allowed, in small ways I began to let adoption slowly slip out of the closet and creep into my life in various ways.

I’ve mentioned the Adoptee Rights Demonstration more than once on my ‘real’ FB. Twice I’ve commented on the evils of adoption to people, as part of passing conversation. (Just short comments, not deep discussions). I’ve ‘confessed’ to a co-worker. This is someone whom I’ve actually talked to in the past, at times when I was really really sad; however, I would never tell WHAT I was really really sad about. I have even worn my cute little ARD tshirt out in public. Once to church, once to a family event, and once just out and about doing errands.

Yup, "closet creep." So far I’m just trying to engage in ‘adoption’ related topics, yet the fact that I have a son lost to adoption is still quiet – still in the closet.

Although that may soon come to an end. Early May I was reading one of the flyers at church. The flyer was regarding support for a local crisis pregnancy center, and it claimed that this center “provides accurate information about options.” For over two years I’ve bitten my tongue and kept quiet about this pregnancy center. Two years earlier I called and talked to them to find out for myself about their counseling. It is very pro-adoption biased and does NOT provide accurate information about adoption.

I’ve had enough of being silent, and took a week to compose a letter. I sent the same letter to all the elders of our church, and to our pastor. I've challenged them about their flyer. In my letter I asked how they knew “accurate information” is provided? Has anyone actually investigated it? And what if? What if they find that the counseling is inaccurate and/or biased?
I sent these letters to people who don’t know about my own adoption journey.


Last week I sent letters to my government legislators.
Recently I got an e-mail with an “assignment” to help adoptees in their fight for open records. Whoa… When I got my “assignment”, to be honest, I was ready to give the assignment back and say I didn’t want it. That I don’t have time. Or that I’m doing enough already. Or that I’m doing more than other people. But I didn’t.

I left the e-mail in my inbox and thought about it. So, tonight I replied to the e-mail asking for more help, because I don’t really understand what it is she wants me to do. I reminded her that I’m brand new to all of this, and need a little guidance in the beginning.


I want to share with you WHY I decided to take on this assignment. Because I
want to fight
the adoption industry.

I can not undo the decision I made so long ago. I realize that I cannot change the past no matter how much I regret it.

While I hope that I am making a difference to one woman, to one child, to one family – I know that I cannot stop the unnecessary adoptions from happening. But what I “cannot do” has nothing to do with what I “can do.” I can join with adoptees in their fight for open records. After all, who are they really fighting against? They’re fight is with the adoption industry.


It is the adoption industry that pays the lawmakers to block adoptees from their records. And it the adoption agencies that wishes the same silence from adoptees as they wish from first moms. The closet was closed for years and years and years. I don’t think I really had any intentions of ever coming out willingly. A month ago it was just closet creep, but now it feels like I’m being shot out of the closet, as if from a cannon.

from Closet Creep
to
Cannon Ball
Posted by Cheerio! at 11:35 PM