pillows for a hard heart?

Well it’s done.
Another year I’ve invested myself in a gift for my son’s amom.
Several years ago – before they stopped sending pictures, they sent pics of the family at Disney World. She made a passing comment about how they had to practically drag her away from the penguins because she just loves penguins.

Each year, since I learned that tidbit, I’ve include a penguin gift for her at Christmas time. I thought it would be relatively simple to find a penguin ornament or some little penguin token.

Do you have any idea how hard it is to find a penguin at Christmas??!!??
Certainly it was not nearly as easy as I thought it would be!

The market is saturated with polar bears, snowmen, and even biker Santa’s. But finding a penguin?

No such luck! It was if they disappeared when the cold weather came.

And so that first Christmas I made a little glass ornament with pics of penguins sledding. I stuck some red sparkly stuff inside the ornament and flicked white paint on it to look like snow.

Then next year Cheerio was not at all creative.
I made a lameo gift. It was a boring candle w/ a pic of penguins sledding. Lame, yup, it was lame that year.

The third year I hand crafted a penguin.
I called him “Fuzzie.” 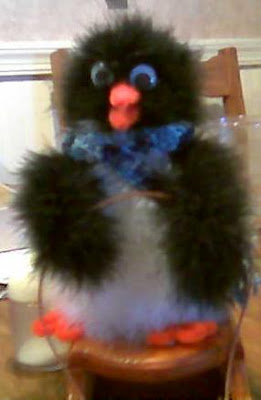 I took a floral brick and carved it into the shape of a penguin.

Then I covered him with feathers.

I made his beak and feet out of orange pipe cleaners.

I cut the heads off two pins to glue the little wobbly eyeballs on, so they would stand out above the feathers.

I crocheted a little blue scarf.

Then I sat him on a little wooden sled and ran the leather sled rope through his wings.

It took hours making him.

He turned out to be the absolute cutest little thing, I’ve ever made.

It was so hard to give him away. I wanted to keep him for myself. Or at least give him to a friend that lived nearby so I could at least see him every now and again.
(sorry poor pic, only one I had, taken w/ cell phone)


Last year I made one of those knot blankets.
I used a print of a penguin family, and the color of the back material was a cheery yellow (to match their beaks and feet). I am not a needlepoint kind of person, but I embroidered her name and the year on it.

Well, this year, I wanted to make a pillow in the shape of a penguin.
Aaaacccckkkk! It turned out looking hideous!!!
I had to scrap that idea and decided that since I was running out of time, I’d just make two cute little ornamental pillows. And tonight I finished stuffing and sewing them shut. And so here, they are… pillows for a hard heart.

I can’t believe I actually put time into not just sending, but actually MAKING gifts for someone who probably wishes I was dead.

She has changed, they have changed, well, SOMETHING has changed. I have no idea what, because I’m not good enough for either aparent to actually communicate with me.

But I am not going to change…. No matter how they choose to treat/ignore me.
I will try to be consistent. I will NOT give them any opportunity to prove how horrible of a person I am.
Riiiiggghht, I was so horrible I sent handmade gifts. THAT is definitely what horrible people do!

I wish I could have seen her face the year she opened the box and found Fuzzie inside.

Did he make her at least smile? Even just a teensy weensy bit? Did it warm her heart, even a tiny spark? Sigh... Oh, well. I guess now she’ll have soft pillows to compliment her hard heart? 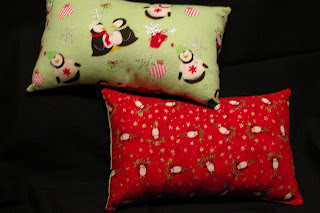