so, just what IS it about Jazz Dance Class??? 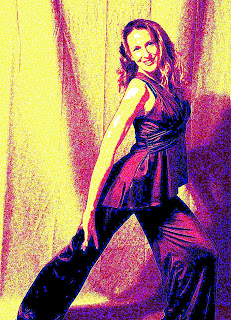 What is it about Jazz Dance?

This is my third year of taking adult jazz dance classes. We have a new instructor this year, and she is really great stuff. The choreography is very cool. By the same token it is also very challenging for me.

We did not grow up with the funds for anything extra, so I didn’t take any dance as a kid. The year after my son was born, I started taking middle eastern dance lessons. But they were private lessons for a small group of women in the instructor’s home.

Those were not ‘formal’ dance classes, but I had a lot of fun. They allowed me to participate in some shows throughout the year. I loved the music, I loved the costumes, I loved DANCE!

I loved how expressive dance can be!

I continued with that style of dance until 2001 when my Grammy became ill. Then the dance just lost its allure to me. I went to a big show during that time, and nothing at all interested me. I drove nearly 3 hours just to get there, and I didn’t buy a single thing that day -- not a costume, no accessory, not even a cd or pair of earrings.

When I first started Jazz, it was very confusing to hear all the technical French terms. I don’t know how to spell it, but at least I recognize most of what they’re telling me to do now. So this year our instructor is very challenging. Nothing is done predictable repeated groups of 4 or 8. No, there is something different for each count. So, a 16 count section is 16 different steps, movements, or poses.

The other gals in the class have had formal lessons growing up, and I am obviously the Sloooooowest one in the group. I do my best to write stuff down and to practice between classes so I don’t feel like a complete idiot the following week.

Class usually starts in September. But that was right around the time I lost the baby, and didn’t actually start class until October. That, of course, means that being the slowest in the group just got a whole lot harder since I was a month behind everyone else.

Two weeks into January, and I realized something. I realized that each Monday night I have to talk myself into going to dance. I have to make myself go. Most weeks I find myself near tears – or already crying by the time I get to the studio.

When I get there, I don’t seem to really enjoy myself much at all. Sometimes I am struggling to keep the tears at bay, other times I want to just walk out.

It was the same thing tonight. By the time I got to the parking lot outside the studio, I just sat in the truck and tried to stop crying. A few times during class I had to leave for a drink of water, because I was near tears.

What is it about this dance class that is so triggering to me?
Most of the time, I think the sadness is related to the baby, and I don’t know why?
Granted, it was an e motional year … dealing with losing the baby … dealing with strained friendships by those who were invisible and abandoned me during that time … … dealing with difficult situations with family … dealing with my little Spuddy Wuddy (Monster Paws) being sick and dying.
Granted it’s been a really, really, really rough couple of months. So, maybe it’s really EVERYTHING all together, and I just imagine it’s just from losing the baby.
But on my drive there, my thoughts are always on the baby, the pregnancy, and relationships after the loss. Why? Why is that?
Is it because I was hoping for a little girl?
Hoping maybe she’d be a little dancer? And she never will.
She’ll never have her hair pulled back in little pony tails and tied with ribbons.
She’ll never give one of those cute little grins for the camera while onstage.
She’ll never wear a cute little tutu for dance at night, then be digging in the dirt and turning over rocks and playing outside the next day.
She’ll never be.
She’s gone.
No life, no breath, no whispers – just gone before she even got here.
So, what is it really
about jazz dance class
that is just
so triggering
for me?
Posted by Cheerio! at 11:31 PM