How does an Abnormal Flower live in a Normal World?
Spring is here and the flowers are reaching for the sunlight. I take a stroll outside and sit in my garden. My hands are wrapped around my cup of hot tea, my fingers are entwined. I sit. I sit silently, and I listen. My eyes are closed and my face is warmed by the kisses of distant sunrays.
Ever so faintly I hear the earth moving, and mulch is being pushed around. I can hear the giddy little sounds of the bulbs sending their leaves up. Their leaves reach up up up, up from the darkenss of the cold earth. Reaching skyward toward the sunlight and it’s warmth.
First it is the snowdrops that break through. Their white bell shaped flowers act like a trumpet to the rest of the sleeping earth and her bulbs beneath. The brave snowdrops break through the mulch, and rise above the snow proclaiming SPRING is on it’s way! Despite the fact that it is still cold and the land seems frozen.
Within a day a cheery yellow face of the winter aconite breaks through the mulch and is joyously proclaiming that winter is over and it’s time for spring. Then it’s almost as if a murmur surrounds me and I can hear the little chanting sounds … “Spring, did they say it’s spring?” “Alright! I can stretch now, way up to the sky!” “I can’t WAIT to break out of this pile of dirt and rocks and see all my spring flower friends again!” Yippie! It’s Spring!”
The crocuses have the cutest little chorus. Their grass-like sprigs of leaves poke through the ground with a breath of fresh air simply and announce, “SsssspRING!” It’s as if they were just released from a shaken soda bottle. But it doesn’t end there. Tiny flowers of yellow, white, and purple rise from the center of their grassy display. As each bloom reaches it’s maximum height, it rests for a few moments before gracefully allowing each flower petal to fall open with the sound of “ahhhh aaaa, spring.” It’s silent and almost wistful.
The daffodils, the hyacinths, the irises, they are all awakening from their slumber. All around me I hear their joy and their energy and their enthusiasm. I just sit there absorbing it all.
Then behind me I hear the leaves rustle and another voice joins the rest. Except this time the chorus becomes silent as I see one tiny tip of a tulip pushing aside the leaves. She is breaking through the crusted mulch and she lifts her green leaves skyward. “Ahhhh. Spring,” she says. “Finally, it’s spring.” 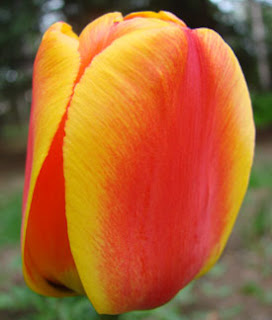 I recognized her right away. That is where the beautiful apeldoorn tulips were planted. What a lovely sight they will be later in the season! The majestic apeldoorn have graceful long sturdy stems and elegant red flower petals. Each petal was artistically designed, with just a touch of yellow/orange, as if airbrushed in place.
I pull myself out of my daydreaming, and realize that the awkward silence is still hanging in the air. I’m not really sure why, so I just sit still waiting for clues.
After a few moments the cheery little yellow winter aconite makes the broad announcement, “Well. Will you look who it is! If it isn’t little Miss AppelLESS Apeldoorn Tulip Girl. Welcome back, you little faker.”
“You mean that?” Questions the little tulip of the aconite? “You’re really welcoming me back?”
“No! Of course, Not! I’m not welcoming you! Can’t you tell sarcasm when it is oozing out of every pore of my stem and leaves?! No, you’re not really welcome here! You’re not one of us. You’re … you’re … You’re ABNORMAL! And you jut don’t belong!” The tirade of the aconite continues “Why did you come back? We didn’t want you last year, or the year before. What makes you think this year will be any different? You ruin the beauty of our garden and our grandiose spring display.”
I could see the little tulip wilt in her hole. Her leaves were no longer reaching above her. They were curled around her – as she tried to hide from sight. She was no longer breathing in the fresh spring air. The other spring flowers mocked her, whispered about her, and turned away from her altogether.
This was not at all what I was expecting in my enchanted spring garden. I lift myself from the earth and walk slowly to the house. Even though I look at the yellow daffodils and purple lungwort, I find that I keep looking over at her. My mind is reeling and searching to find what makes her “abnormal?” I go to the potting shed and grab a pair of gloves, a trowel, and a small clay pot. I return to this lonely little tulip, being very careful with every step to not disturb other flowers that have not broken through.
I kneel down and gently dig around this tulip, and gently talk to her. “There there, little girl. Everything is going to be alright. Don’t you worry about a thing.” As I get ready to move her from the ground into the clay pot, my suspicions were confirmed. Instead of a healthy full bulb, this one was misshapen. Apparently at one time she was damaged when trying to move her.
Several memories flashed through my mind seemingly all at once.
When I had my son, I was like that tulip. I brought into this world another life. It was beautiful and precious. He was perfect, except for one thing - I was his mother. I was afraid that if I were to parent, I would ruin him. That his future would be marred and he would be shackled and unable to reach his full potential with a mother like me. Yes, this is what adoption professionals WANT the expectant moms to think, that "Your baby deserves MORE than YOU." They were so WRONG, and I made the worst mistake of my life believing it.
I felt just like this little tulip I held in my hand. At one time someone sliced through the fleshy bulb. Now a chunk is missing and she will never flower agian. When they separated me and my child, they sliced through the flesh of my soul -- through that very sacred mother/child bond. Without him, a fleshy part of me is missing, I have never been the same.
I take the little tulip to the house, not really sure what I’m going to do with her now. What do you do with a tulip that will never flower? She had flowered once, but that part of her has been cut away, and she will never lift another face of petals to the sky again. Do I just toss her in the compost bin behind the shed? What dignity would she have left then?
No. I think, instead, I’ll keep her here on the porch with me.
After all, I know what it’s like being an abnormal flower trying to live in a normal world.
abnormal
flower
Posted by Cheerio! at 6:06 PM