Thursday, 8/27/2009 Today I had my first OB appointment. It was not a visit with the doctor, just an appointment with the in take nurse. I am so glad my hubby went with me, because I was very anxious. As we sat in the waiting room, I was wringing my hands the entire time. This is now how it's SUPPOSED to be. I'm supposed to be all smiles and overjoyed that I'm going to have a baby. But the teeter totter inside won't let that happen. Some friends (other original moms) say it's just my body's way of trying to protect itself from what happened before. They called my name, and we headed down the hallways. The nurse steers me to the potty for a 'sample,' then leads my hubby on to the exam room to wait. I was so uptight that I just couldn't go. All the while, my mind starts kicking into overdrive and I feel my chest and throat tightening up. My face muscles start to feel drawn and a lump forms in my throat. "No, I can't start crying now...not here ... not now..." I kept repeating that to myself over and over. It felt like I was in there for house as I fought to maintain 'normalcy' until I was finally able to provide a sample. I washed my hands and splashed water on my face. As I looked in the mirror, I thought that my face didn't look too splotchy & maybe no one would be able to tell that I was fighting to hold back the tears. I finally opened the restroom door and there was the nurse standing just outside. She lead me to the room where my hubby was waiting. Then she left to test the sample (ewwww). So, once again, I'm sitting and waiting. It almost feels like I'm waiting for a sentencing and an 'inevitable doom'. My hubby can easily see me struggling and rests his hand on my knee to reassure and comfort me. The nurse walks in and closes the door. Everyone here has been pleasant so far, and she is no exception. She had a big white smile as she sat down and spread out her stack of papers. She put her hand on a 3 ring binder as she moved it into it's place. Immediately my entire body tensed, tears welled up in my eyes, my heart began to race, my fists clenched, and I started feeling shaky; all from just seeing this binder. "Your Baby's Birth," it was labeled, and had a picture of an infant on it. 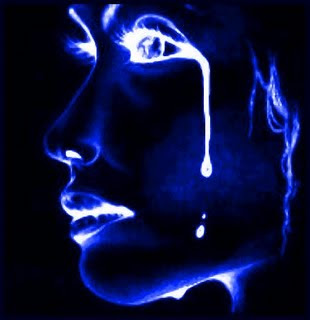 The picture of an infant is what triggered everything I'd been trying to hold in. Here it was 16 years later, and I still cannot see an infant, not even a picture of an infant, without feeling panicky. It was very apparent I was distraught, so the nurse stopped her spiel and said, "What's wrong? Talk to me." My throat was constricted and I could not even utter a sound, nothing would come out. My sweet hubby helped out by saying, "She's very anxious about everything." Then the nurse waited patiently (no pun intended) until I could at least talk again. With a very choppy and quiet voice, I squeaked out in broken words, "This is not my first pregnancy." Then the dam broke and all the tears I was struggling to hold back spilled out over the edges and streamed down my cheeks. People who have not lost a child to adoption ridicule the 'second time infertility' topic. They forget that the mind and body work together or against each other; however you want to look at it. Those insensitive narrow minded know it all rosy adoption pain pushers don't care to acknowledge how very real this is for us. Adoption IS a TRAUMA to both the mother and the child. It is NOT a "gift" (well, maybe a gift of scorpions and rattlesnakes) and it is NOT a "win/win solution." After I mopped the tears from my face and could speak again, I explained to her that 16 years ago, I did not know the truth of adoption, and when my son was only 3 days old I lost him to adoption. I wanted to make sure that I expressed the idea that 'untruth' was involved, and that it was not happiness to lose him. The nurses' response was "Just remember, you made the best decision you could at the time based on the information you had available to you." Then she rearranged the order of how she usually does things. She was really sensitive and kind, she was wonderful. When we left, I was still edgy, but I had calmed down quite a bit. When I got home, I put the 3 ring binder on the kitchen bar. I got out a sharp paring knife and made a slice along the top of the binder and removed their picture. Someday I'll be OK with pictures of infants, but right now, I'll leave this space blank for the pic of my own little Flower Bud when she/he arrives.
Posted by Cheerio! at 9:23 PM